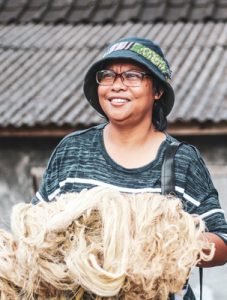 Aisyah is the founder of the NTB Mandiri Waste Bank and Empowerment and Plastic Recycle Trainer.

Create awareness on waste and environment

“Her interest in the field of environment emerged from worry would be the lack of awareness of the public of the trash and management. Departing from there, she initiated a waste bank with the concept of household -based management .

Her commitment to the management of garbage took her to the State of Sakura, Japan, to follow Waste Management Training sponsored by KEPA (Kitakyushu Environmental Preservation). Science who got subsequently adapted to the conditions of the environment and social in West Nusa Tenggara, and further strengthen the movement through the Trash Bank NTB Mandiri (NTBM).

System Bank Trash that is introduced to the public area is based on a system that is easy, inexpensive, and invite anyone just to contribute. More than 2000 people have followed the training management of trash , both organic and inorganic, and dozens Bank Trash are scattered in Nusa Tenggara Barat when it had stood at the bottom of the network coordination NTBM.

Until now , she is still actively providing direct training to the community on waste management. According to her, hope to build West Nusa Tenggara green and free of garbage, can only be realised if every individual took down a hand to overcome the problem of garbage and the environment .

Background behind the establishment of the Bank of Trash NTB Mandiri is because the garbage in the city of Mataram in the year 2010 can produce as much as 200 tons / day and in the year 2012 increased two times as much into a 490 ton / day of all the 50% dihasilakan by garbage home household and only 25,5% handled ( health research data ).

Year 2011 Bank Trash NTB Mandiri has a number of customers as many as 19 people and all the activities of training and transactions saving in working at home. Year 2012 the number of customers into 26 people began to gather the results of the craft of the customers who have been trained for in marketed from mouth to mouth. Then extended to the guests who visit, held a workshop and exhibition simple with the help of friends , and launching products crafts waste through Lombok Eco Craft. Year 2013 has partners target of several groups of people to manage the bank trash and follow Waste Management Training in Fukuoka, Kitakyushu City, Japan. In 2014 the number of assistants reached 33 community groups. Year 2015 held Lombok exibition the first in Idoop Hotel to introduce the product Lombok Eco Craft and teach upcycle craft of waste in schools in Darwin, Australia. Year 2016 follow exibition in Darwin Converemce Center, Australia. Year 2017 Number of customers became 750 people and the number of partners trained to grow into a third partner in the management of composting organic TAKA and start the program Kawist Krisant. In 2018, introduced the waste bank system in Europe , Czech Republic , Austria, and Hungary . In 2019, the campaign is “Wisely to Manage Organic Waste”.

“I Support FWoC because members play a role for all women to make changes..”