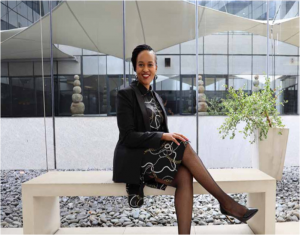 July 2020 is the Female Wave of Change Story telling month: Stories matter and we want you to share yours!

It is widely accepted that the legal profession, specifically in the mining industry, is still a largely male-led space, writes Ntsiki Adonisi-Kgame.

“This fact presents the women in these areas with many barriers, but also countless opportunities. Women in the legal profession face numerous issues, which include: under- representation of females at senior levels; inconsistent allocation of work; inadequate exposure; unequal pay with male counterparts; lack of promotion and business development opportunities; and failure to retain woman attorneys, particularly women with children. Women tend to work while on maternity leave in order to remain relevant and manage competition. Furthermore, female associates consistently complain about the absence of female leadership in law firms, which feeds into their inability to conceptualise a long-term future in the law firms.

I have been fortunate to work in and navigate my way through both the mining and legal industries, which are very male-dominated. It is not an easy task, however; as a black woman in mining law, a significant part of my job involves shattering racial and gender stereotypes.

The exposure I get from practising mining law at ENSafrica is a great pportunity for me, as I have been exposed to a range of influential stakeholders in the mining industry who have been instrumental in supporting me throughout my career. Although there has been tangible progress in terms of integrating women into the industry, women remain under-represented in the industry and it will take the joint participation of men and women to achieve better results.

The topic of women’s advancement and empowerment is receiving increased attention across the globe. The Law Society of South Africa’s Women’s Task Team was established in 2016 for the purposes of  advancing transformation and uplifting female legal practitioners in all key areas.

Research shows that the number of female students in law schools far outweighs the number of male students. Similarly, there are far more female than male candidate attorneys in law firms. However, most female practitioners exit the industry before reaching partner level.

A change of mindset is crucial to ensuring that women stay in the legal profession. This will enable the industry to adopt measures that accommodate the needs of women with buy-in from all the stakeholders. To do this, we require both men and women in leadership positions in the legal fraternity to recognize the value that women bring to the table and to champion women’s advancement and empowerment. The government also has a huge role to play in driving and implementing policies that are supportive of women’s advancement and empowerment.

The legal fraternity needs to draft, promote and implement policies that support the advancement and empowerment of women. This should include the participation of women in business development initiatives; it should focus on the training, sponsorship, coaching and mentoring of women. Viable plans that are designed to retain females from junior to partner levels must also be introduced in the workplace. The women in the industry must pay it forward and mentor other female lawyers to have better female representation and more successful woman lawyers.

Furthermore, companies that use the services of lawyers must recognise that they have the power to influence gender diversity in the industry by requiring law firms to prioritise and brief female lawyers in key deals. It is also notable that most companies have adopted policies that encourage gender diversity; however, companies often fail to have systems in place that hold management accountable for ensuring that the policies are implemented.

Women need to be strategic in dealing with gender issues and should continue to work smart and push boundaries. The leadership in the legal fraternity and mining industry must support gender transformation. Men need to be part of the narrative to enable a change in the status quo.

The achievement of gender equality is a development that has been gaining traction globally and can be achieved! We have to be deliberate in achieving gender diversity in mining and the legal profession.”