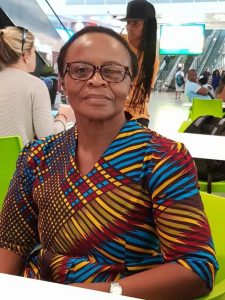 July 2020 is the Female Wave of Change Story telling month: Stories matter and we want you to share yours!

After a long career as a teacher I now wish to travel!

“Born 8 April 1956. I am married to Michael Mkuseli Bashe and we have three grown up girls and granddaughters. We are both retired. Our wish is to travel. We had started but our tour was cut short
because of the Corona Virus.

My life as a teacher

I hold Bachelor of Education from the University of South Africa. This was after I had done my Higher Secondary Teachers Diploma with Fort Hare and my Bachelor of Arts with Unisa. I also have other certificates and courses on the side: ETDP Assessor certificate, Teach a Trainer; Outcomes Based Education. Courses, I have linguistics up to Course 2 level and the Theory of Literature, Course 1 from Unisa.

I have taught English and History the Eastern Cape, High School level for ten years and in Gauteng for fifteen years. I came to Gauteng in 1992 and taught at Barnato Park High School. I was introduced to Integrated Studies which was championed by a young lady from the United States. The purpose was to integrate content subjects (History, Geography, Biology) into just English. Then the English was to be taught in Themes: Geographical, Historical, etc.

I helped in the Setlhare Project, the purpose of which was to write a Science text book in the language that was going to be accessible to learners, especially the non English speaking. Indeed a text book was put together for Grade 8. In 2006 I resigned from Barnato Park. I was not growing.

However in 2007 I gave teaching another stint. I began teaching in Vorentoe. I taught there for two years. Vorentoe was a previously Afrikaans school and had kept its Afrikaner character and tradition. The principal was an Afrikaner man. We just did not get along. I did like the way he ran the school especially the administration side. I learnt a lot from the school.

I have been involved with a Teach South Africa Program as well. There I monitored student teachers who were in the program. They had been crush trained in Outcomes Based Education and I was to
make sure that they did follow it in their teaching. This was for only 3 months, though. The program sought to lure graduates to take up teaching as a Career.

I have volunteered to run a crèche in an informal settlement in Hartbeespoortdam. The crèche is run by a Malawian pastor. The crèche ran in an old and dilapidating farm house. There was neither running water nor electricity. It was a huge challenge. The level of poverty was beyond belief. Most of the children there were born of girls who were receiving Grants from the government. I taught the little ones focusing on
their development. I also trained the two ladies who were voluntary care-givers a bit on Early Childhood Development.”