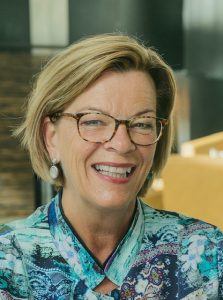 From Corporate leader to Empowering Women Across the World

“I was born in a middle-sized town near the sea in the Netherlands, as youngest daughter of hardworking, loving parents, with a sister 7 years above me and a brother almost 11 years older than me. In Dutch, they say “nakomertje”, something like the one who comes late.

My name was chosen specifically in case I would be born on December 29, the day my maternal grandfather had died a few years before. Renée is the female form of the French verb “renaitre”, which means being born again. So, if I had been a boy, it would be René, now it was Renée. And although I don’t look like my Opa physically, my parents told me I do have some of his resilience and I just love the story behind my name!

My youth was mostly peaceful, maybe sometimes a bit lonely, because my brother and sister flew out for marriage young. I spent those years taking school very seriously, going for piano lessons, doing sports like volleyball and gymnastics. My parents supported me, stimulated me and were very proud of me.

They started a small commercial business soon after my birth, so I was very used to having both of them working (from home at the start), also in the evenings and sometimes in the weekend. In an era, that my Mom had to resign her job because she got married, this was quite special and helped me to enjoy working and being a mother later on too!

Nature or nurture, that is the question

Is it genetics or the way how you have been raised, nature or nurture; that’s the question. For me, work hard, go on when it is difficult, use your talents to the full, achieve something, take responsibility, be honest and respectful, are values that I can track back to seeing my parents work in those years.

I wanted a career and a family

After finishing my Masters in Psychology (personality psychology and organizational psychology) I started working at Philips, a large tech Corporation, first in recruitment, later on in a variety of HR roles. I did an Executive MBA, supported by the company, and began to branch out my career in the international space, working with businesses across Europe, in the US and later on in Asia too. I loved my work, the dynamics, the achievements AND I wanted to have a family. In a time that most women stopped working after giving birth or work 3 days a week, I was so fortunate to have a very supportive husband who went all in! We decided that I would continue to work full time and he would be the one to work part time -meaning 95% and 1 day at home. He was the only man taking baby swimming lessons with our daughter and I would get questions like: “How do you do it with the children”? In the Netherlands this was the world upside down in the nineties, for us it was the way we wanted to do this!

The only woman in the team

At work, I was mostly the only woman in the teams I was member of. In the later years at Philips or NXP, the company I worked at from 2006-2016, we were with less than 5 % Executive women. Research says that you need a majority approximately 30 % to change an organization and we were nowhere near, except in some HR or communication teams.

The power of one

This notion led me to another realization about how I stand in the world, how I look at successful change and how I want to achieve things; call it my vision. While the word “vision” may seem daunting, something maybe unreachable or something for the big leaders in history, I believe that a vision starts with a small step, a move, one step at a time, continuously. Every day, your individual actions touch people’s lives. Everywhere you show up, you are a role model for someone else. Without even realizing it……

Let me share one example of how this dawned on me. Quite early in my career I was HR manager in a Business Unit that was in financial hardship, so our Management Team needed to take actions. One of the alternatives was to downsize the factory in Eastern Europe. We had calculated a social plan for the factory, although that was not particularly necessary given the local circumstances. Presenting our plan to the Board, we got push back on the social plan and before my boss could step in, I made a passionate case for keeping the social plan in with arguments like potential damage to reputation and fairness to the employees. The plan was accepted and we executed it with grace and respect for the work that the people had done for the company.

The courage to step up and speak out

Years later, I met a female purchasing manager who was in that particular meeting and she said to me: “I was so amazed that you had the courage to step up and speak out for that group of employees to the Board, that has been a great learning for me in my career”.

And so here I am now, in a totally different world than Corporate high tech, working on my vision every day, sharing my learnings consciously and on a much broader scale than I could ever envision, empowering women across the globe, supporting them to step into their leadership, in my own coaching business and with inspiring organizations like Female Wave of Change and Inspired Women Lead!

“The world will be a better place if we value feminine and masculine competencies, energy and qualities equally!”