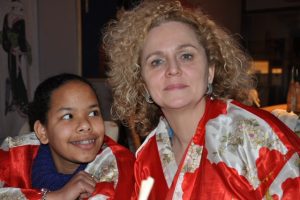 My search for the meaning of ‘home’

I have always been intrigued about what home means. To be at home, feel home, have a home. This has to do with my upbringing. I was born in the Netherlands, but my parents were adventurous and wanted to travel. So when I was one year old, we left for South-America, where I lived till my 18th year.

Borders are also intriguing. I never thought about them, till I started working with refugees and discovered that many people cannot travel, they cannot freely move around crossing borders from one place to the other. When we speak about racism, discrimination, exclusion, we somehow experience the fact that borders divide us, because they highlight the difference in colour, religion, upbringing. In a similar way the place where we have our home, can be a source of privilege, or disadvantage and marginalization – it divides between classes. Literally this means that if I am born in Aleppo in Syria I have less privileges, by that mere fact. So apparently home is a place which is confined by boundaries which determine not only my cultural baggage and identity, but also my chances in life.

Travelling like a nomad early in my life, crossing borders constantly, has been very defining. I was always the outsider. I came from an unknown place, to leave after a couple of years to another unknown place for the people I lived with. In those 16 years I lived in 4 countries: 5,5 years in Colombia, 6,5 years in Argentina, 2 years in Holland, 2 years in Brazil. I moved 6 times to a new house in that period. So I can say that my memories are scattered across all those countries, and I do not have one home but many.

The question is how people deal with that fact, how I dealt with it. When I returned to Holland it was not a real choice – I did not know where to go and thought Holland would be a good place, since I was born there. When I returned I however discovered that I had no clue what it meant to live in Holland. My Dutch was very bad, I had no common history with all the young people that I met, I was not used to the weather, the food, the customs in the country. So I had to learn Dutch properly to start with. Then I started to adapt in my way of dressing, in what I ate, in how I spent my time. It felt very strange in the beginning. It did not feel like being at home at all.

Where do I come from?

So I started to travel a lot, moved countless times and was often confronted with the fact that people asked me where I came from. People somehow could see or feel that I did not really belong and I solved it by saying that I belonged nowhere in particular.

This gives discomfort to people I discovered. They want to label you, box you in, understand where you are from. It makes uneasy if you somehow do not fit into a frame. So I decided to leave in the middle where I came from. I just avoided the topic because I felt that it created a distance between me and the other that somehow could not be overcome. In a sense I denied my own identity to try to fit in by doing this.

I realized that I was doing that, when I adopted my daughter. That was in 1998. She comes from Colombia and I adopted her when she was 4,5 years old. She is black. I never thought about the fact that I would have a daughter that is black. For me it made no difference. I was worried it would be a problem for her. How can a child explain that it has a white mother? I became acutely aware of my skin colour, something which I had never thought about. People started to look at me when I walked with her in a curious and invasive way.

I was a passer-by in the lives of many

When I started to work with refugees after adopting her, somehow the pieces of the puzzle that had been my life, fell in place. Refugees have no home. They have literally lost everything that makes part of what home means: no house, no street, no neighbourhood, no city to go back to at times. Just memories. Meeting them was confrontational. Because I saw myself in them somehow. I did not have a house, place, neighbourhood to go back to except at the other end of the ocean. And my memories were frozen in those years, while all the people I had grown up with had woven a pattern of memories they shared together. I realized I was a passer-by in the lives of many people. I was part of their stories and memories, but just for a short period. This was a painful realization, but also a liberating one.

Home is where we are

It was a woman from Zimbabwe who gave me the answer to my life long search. When I met her she told me her story, how she had had to leave everything behind and start from scratch to rebuild her life. I asked her about what home meant to her. She gave a simple answer: home, that is me. When I heard her say it, I thought; yes that is it. Home is where we are. If we accept that, acknowledge that, then borders become meaningless, even a country. It is just a landmark. What matters is the person, the soul of that person, the memories, the stories, everything that defines that person. Then we don’t have to ask: where are you from? But we can just say: so nice to meet you, I would love to hear your story. I have been doing that for a while now. It is another conversation we then have: we then discover what unites us. It is a lot; much more than what separates us.r