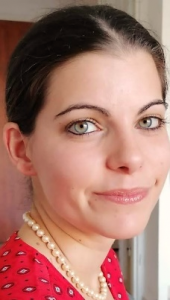 Female Wave of Change is very excited to welcome Nandita Natarajan into her Circle of Wise Women. Nandita lives in France, works in Switserland, her country of birth and has a very international background. Nandita will be focused on music and youth! We are looking forward to create those waves of change.

A specialist of the voice

“I am classical singer, vocal coach, professor of voice, as well as a girls’ rights activist. I am a specialist of the Voice, “a mid-wife” of the voice.

I believe that one’s voice is the most powerful personal transformation tool that support birth of self and forging connections with others. It reveals our deepest secrets, perplexities and aspirations and encapsulates who we are and is the song of our soul.

I am from a mixed background, from a Portuguese mother and Swiss-Italian father.

I was born in Switzerland and raised in Geneva until the age of 9. My family was then transferred abroad where I spend many years in Alma-Ata, Kazakhstan (now Almaty after the Kazakh revolution and the URSS dissolution), USA, in Texas, then later in Africa.

Exposed to an early age to harsh realities of children and girls suffering in regions of armed conflicts, to war, famine, the loss of my father at the age of 11, my mission to contribute to social justice was born. Once back in Europe as a teenager, I started singing to cope with my traumas. I performed in hospitals, in children’ home for displaced children and in Jewish medical institutions for Holocausts survivors.

Ever since, I have represented causes that I feel strongly about through music. These include representing women and girls’ rights at the UN, holding concerts to raise funds for children in conflict zones, advocating for the environment at the Eurovision contest 2004 and collaborating with the BBC and UNESCO and different European television channels as an advocate for peace.

Beyond being a performer, I mentor children, young women and girls across the world to help them find their voice and step into their power and leadership. I help them voice what they are not able to express as children.

I studied classical vocal studies at the Trinity Laban Conservatoire of Music and Dance in London, and musical theater at CHOREIA, Paris. I also specialized in Linguistics, literature and speech development at the University of Sorbonne in collaboration with the University of Sheffield in UK and have trained in kinetic voice teaching methods to empower youth communities through group singing.