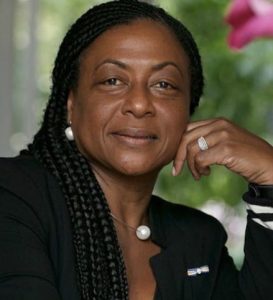 Female Wave of Change is excited to welcome Anne-Rose Abendanon as our Ambassador in Suriname, a small but beautiful country in the northern part of South America. Anne-Rose will be working closely with Ruth Sinkeler, who moved from Ambassador Suriname  to the Ambassador First Among Equals role in the Caribbean. They are already building a great team so we expect to see huge waves in their part of the world!

Woman on a Mission

“I was born on February 23st 1964 in a small village called Moengo, in the north-east of Suriname. In those days we were a colony of the Netherlands, but Moengo belonged to the Suralco, because of the winning of bauxite. What I did not know back than was that my birth place would prove to set the standards for my steppingstones in my later career, as being a typical American way of living.

What many do not know is that Suriname bauxite played a crucial role during the war in the production of airplanes and the victory that came to it of ending world war II.

During my study in health-management I learned about McKinseys 7S model and recognized my being as an individual who likes to connect people. When I graduated from the university of appliance science, one of my teachers told the public that I am a woman on a mission. That is to connect those who are in need with the ones who can provide (in many different) ways.

Down to earth corporate social responsible individual, peoples person, (social) connector, activist, Soroptimist (awareness, advocate, action) are the words that describes me in a nutshell.”

“I support Female Wave of Change because I am convinced that women, when set in their strength, could make a difference in saving our planet for the better so the generations after them can benefit from it ”