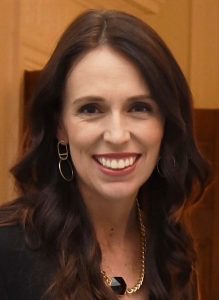 The “Real Authentic Feminine Leader in a Changing World” Award was granted at the Global Female Wave of Change Conference in South Africa to Jacinda Ardern, Prime Minister of New Zealand: a real authentic feminine leader who operates on the global stage.

The Female Wave of Change Global Team decided that the recipient should be someone who breathes the values of Female Wave of Change. Someone who acts from the heart and shows the world how to be that feminine leader by using her feminine values and feminine energy. Someone who fulfills multiple roles in her professional and personal life and shows how these roles fit perfectly together. Someone who creates new legislation, shows global leaders you can be the change the feminine way, shows her nation how to act in situations of crisis, how to be courageous and vulnerable at the same time.

Jacinda Ardern is a great role model for women and men alike and she shows that you can be an authentic leader when you believe that your gender never stands in the way of doing anything you want.

It is an honor for Female Wave of Change to present this award to a true feminine leader; congratulations Prime Minister Jacinda Ardern

At the Global Conference in South Africa, the Award was accepted by our Female Wave of Change Ambassador Australia Cynthia Musafili Wright, who will make sure the award will be delivered to Jacinda Ardern in New Zealand.