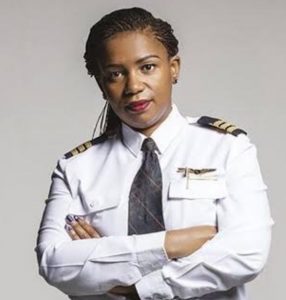 She was born in October 1979. She grew up in the Northern part of South Africa, a province called Limpopo. She did all her schooling in Limpopo until she finished matric the. She fell in love wit the idea of flying from the aged of 13. Curiosity about why aircraft manage to stay in the air is what inspired her to consider this career.

In March 1998, Asnath started with her training in Polokwane at G&L Aviation and the move to Progress Flight Academy later that year to finish off her Private Pilots License. She went on to complete her Commercial Pilots License on the 8th of October 1999.

She joined the South African Airforce in 2001 until December 2002. She flew for the United Nations World Food and The Red Cross from May 2003 until January 2007. During this period she operated mainly in Central and West Africa countries, She also flew for DHL in the Southern African Region.

She joined South African Express in July 2007 and worked there until January 2010.

Asnath started flying for South African Airways (SAA) in February 2010 to date. Currently she flies internationally as a Senior First Officer on the Airbus 340.

She was recognised as one of the 100 Greatest Women in Aviation World-wide (Authors Liz Moscrop and Sanjay Rampal). She also receive in 2003 – First African Female Pilot Award by Black Management Forum., Limpopo Women in Excellence Awards – Black Management Forum. She was nominated for the Woman of the Year Award in 2003 (Science and Technology)

More information about the Global Conference and registration