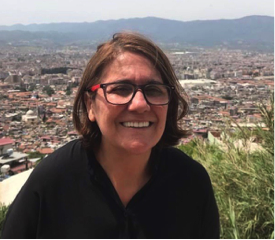 We are very excited to welcome Saadet Ozdemir as our Female Wave of Change Ambassador in Turkey.  Saadet was introduced to our growing movement by our Ambassador Saskia Harkema and will be working closely together with our Wavemakers Cosku Mutlucan (based in Istanbul) and Hazal Unat Lebbink (based in the Netherlands).

I was born in Turkey and raised in Australia. I was educated in Australia, worked in a diversity of sectors. I have always been a passionate community activist and simultaneously been a fully engaged member of the multicultural community focusing on local issues in global context.

For many years, I’ve had a long and victorious affiliation with the not for profit sector, tertiary education, as an employee, activist, student, lecturer, leader, organiser, trainer, mentor, industrial relations and an advocate. In 2016 I have taken a leave without pay from Maritime Union of Australia (MUA) to under take self-funded pro bono work with the worlds most vulnerable communities women refugees in Turkey.

I reside in Antalya where together with partners established an alternative childcare and Café de Atolye, a space where families can meet and share their stories and conduct creative skilled workshops in languages, art, performing drama, music, crafts and cooking at the same time earn an income.

I can think of no better way to honour the riches of my education and work history than sharing with the communities at large.

“I support the Female Wave of Chance because, I believe that women in current times will lead the way for a better world where they can live fulfilling lives, pursuing their individual dreams and those of their families. It is my view that the tools that we need for the next century is connectivity, access to knowledge and global access to each other

I am honoured to be part of ever growing ‘Female Wave of Change’ as we connect together to become even stronger leaders in our communities, we will become entrepreneurs and in charge of our own economic, social and political future. I strongly believe that only together we will embrace ‘Female Wave of Change’ as a powerful means of communicating and coordinating with our communities and our global community close and far, and we will move forward together in harmony and will not settle with being left behind. Only together we will unite and be strong.”