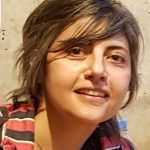 Female Wave of Change is very excited to welcome Hengameh Bolouri as our Female Wave of Change Ambassador in Germany. Being raised on several continents,  Hengameh has a very international mindset and is able to connect women and men from different backgrounds and walks of life. Very much looking forward to create some waves in Germany and beyond!

“I’m Iranian, raised in America, and now living in Berlin.

My Parents are from Tehran. While my dad was studying in Germany, my mother joined him in Münster, where I was born. After a couple of years, my family moved back to Tehran. As a child, Iran was foreign to me but I quickly adapted. My first spoken language was Farsi. At the age of 7, my mother decided to leave her homeland to provide a better life for herself, my sister and I. We moved with my grandparents to SLC, UT. I spoke English quickly to be accepted as an American. After 8 years, the entire family moved to Atlanta, GA for better business opportunities for my grandmother and mother, both being the glue of the family.

I graduated as an Electrical Engineer at Georgia Institute of Technology and later worked as a Software Engineer at Nortel Networks and Lucent Technologies in Boston. After 8 years, I left the telecommunications industry in 2004 to explore opportunities in Sales in variety of industries (Staffing, Real Estate, Advertising, Software, Transportation, and most recently Conferencing).

My self transformation journey started in 2002 living in Boston where I left my Engineering job and started building a community and connecting others as a hobby. Starting in 2004, my full-time job became in Sales. I acquired many valuable skills: client relationship and negotiation, working closely C-level management and being a team player, quickly learned the services we sold. I’m always ready to try new approaches to win bigger sales. In fact, I honed in my relationship and negotiation skills socially. With my Engineering and Sales mindset, I was drawn to discussions on problem solving, suggesting ideas to my friends and colleagues.

After living in Boston for 14 years, I needed a change to keep growing and learning about people and create a safe place to make mistakes, play, learn, and grow. This is how Playgroundhub.org was born as I reflect to my own life.

It’s been 4 years in Berlin and I absolutely love it. It’s been a slight setback but with Women in Negotiation and Female Wave of Change, I have the support of no judgement and comparison to become self aware to lead. I’m excited and honoured on this new journey as an Ambassador to lead Female Wave of Change for Germany. I look forward to connecting and leading women and men to impact the world one step at a time.”

“I support Female Wave of Change 110% because women and men from all walks of life should inspire and support one another to create a shift in mindset in building communities in their relevant country and across the globe. These wave of leaders and learners need a safe platform to play, learn, and grow without being judged and compared. As Simon Sinek quotes “Leadership is an education and the best leaders think of themselves as the students, not the teachers’.”