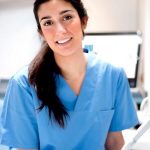 Read all about her in her introduction!

“My name is Patricia Bargiela, I was born in 1982 in Madrid. My mum is Uruguayan, my dad is Spanish and I have an older brother.

I have been fortunate enough to belong to a family in which women have been and are the foundation and binding that holds the family together. Women have been valued and respected in my family for that reason. One could say (oddly enough for the times) that I was raised as a feminist.

My grandmother on my father’s side came from a small town in Galicia. She decided to become a teacher, something extremely rare in those times. It was so rare that she was the only woman teacher in all of Galicia and got a square named in her honour for that very reason. She was a very brave woman who decided to emigrate, sailing to Uruguay, alone with her three kids and managed to bring them up successfully.

My mum came from a well off family in Montevideo (Uruguay) and that’s where she met my dad. She is an incredibly strong woman and the engine that drives our family. A strength she inherited from her Italian grandmother. She decided to come live in Spain for a while with my dad and they ended up staying. She always told us that she really struggled to adapt to the Spanish way of life of a Spain that was still under Franco’s rule. She struggled to adapt to a life she wasn’t used to, where women could not have a current account, or couldn’t vote and where frowned upon whenever they were shopping next to their husbands. She was used to a much more socially progressive Uruguay and found it very hard.

Both my brother and me were raised to have respect for people and to value everyone as equals, regardless of their gender or their origin. As a woman, she taught me to be independent and autonomous, and to never let anyone belittle me because I was a woman.

It is now my turn to be the mother of a little boy and girl. I get bursts of all the wisdom I received and a feeling of tribal belonging the women of my family managed to build. It falls on me now to transmit these learnings.

Thanks to all that support and advice I received I have been able to grow professionally and to position myself in a business that remains to this day mostly ruled by men. I am a Dentist and my practice is devoted exclusively to dental surgery. I am a university professor and I having more experience than other peers I have had been excluded from jobs, raises and project just because I am a mother and a woman.

Women used to support each other, transmitting our wisdom to others. Nowadays most of us are alone, without any guidance and help. I believe I have been very fortunate because the women of my family together with my experiences have helped me grow and feel empowered as a woman. I believe that with the movement Female Wave of Change, we have the opportunity to help and empower each other. We have the opportunity to change things that need changing and to make a positive impact in the world. Giving women their rightful place and helping the new generations to be less prejudiced and unequal. We have a very important mission and Female Wave of Change is a very important movement to achieve our goals.”